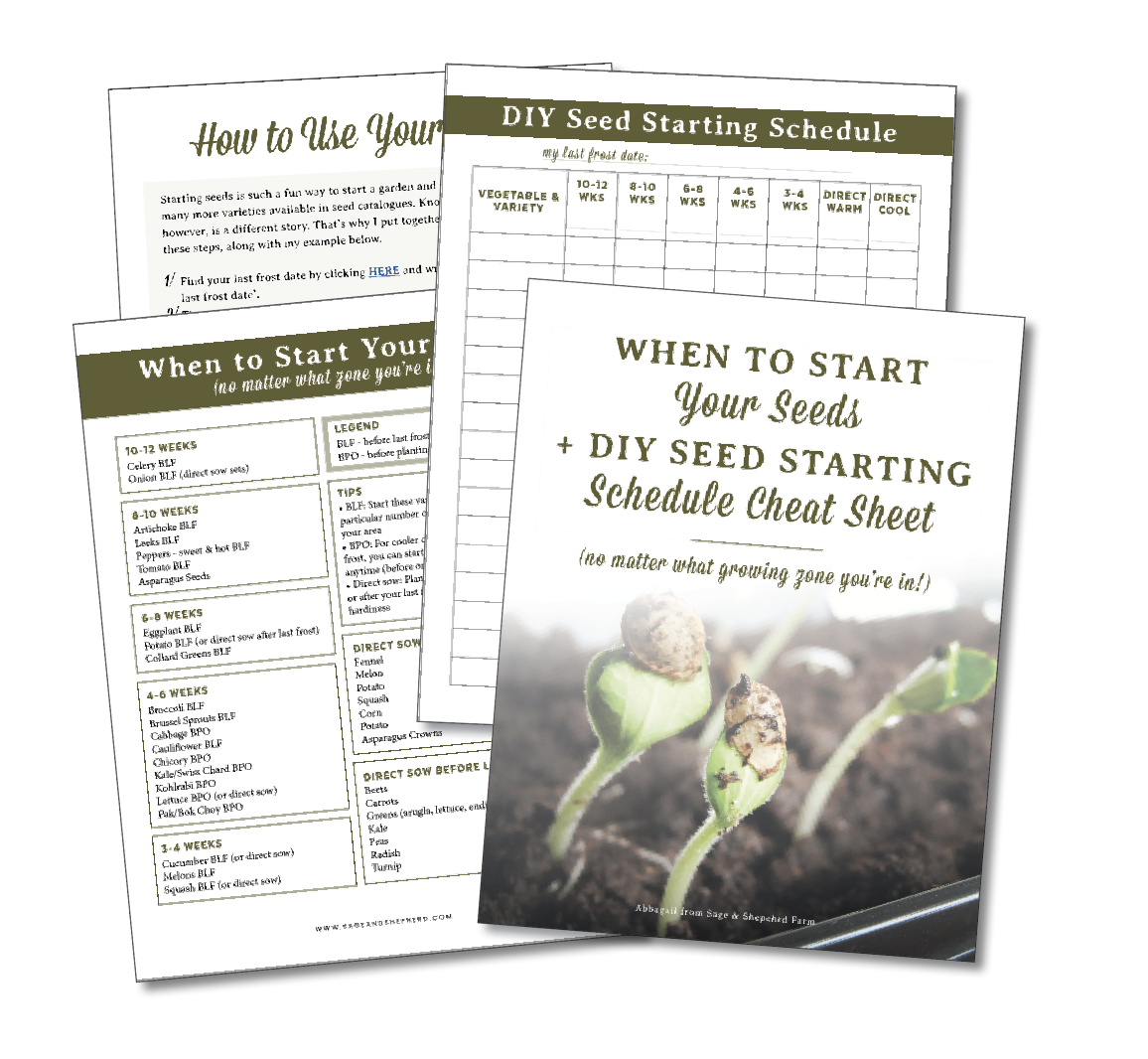 Wondering when to start your seeds?

Download my free ‘Seed Starting Schedule’ and simply fill in your last frost date and make your schedule!

When To Plant A Vegetable Garden?

However, most people do not take advantage of cool seasons and cold season crops. By growing in these seasons you can really extend prolong the amount of harvests you are getting and save product money throughout the year.

So be sure to try out a cool season spring garden this year as you will be able to plant about a month or two earlier than you would for a warm season garden.

Which brings me to my next point – the three growing seasons!

What Months Are The Growing Season?

To start, I will clear up by filling you in on each growing season and what months they fall into. I like to group my plantings into 3 categories, to make three growing seasons. The first category is cold season, followed by cool season, and then warm season. Therefore, any month can technically be growing season!

Although, most commonly gardeners plant their gardens after their last frost (the warm-season) and perhaps miss out on the other two gardening seasons.

These are vegetables that are tolerant of frost and can be over wintered in a greenhouse. This extends from December to March, also known as winter vegetables. The vegetables to plant in the cold season are:

These are veggies that can tolerate a light frost, but nothing consistent.  This extends from March to May, and again from October to December, also known as spring and fall vegetables. The vegetables to plant in the cool season are:

These are veggies that cannot handle any frost, at all. You plant these after the last frost in your growing zone. This extends from May to October, also known as a summer garden. The vegetables to plant in the warm season are:

Keep in mind these general guidelines for an Ontario climate.

Can You Put Seeds Straight Into Soil?

Yes you can, this is called direct sow. Again, though these fall into 2 categories, before and after the last frost. This is an important step in knowing when to plant a vegetable garden.

Vegetables that work best as direct sow before your last frost (meaning they are tolerant of the cool) include:

Vegetables that work best as direct sow after your last frost (meaning they are not tolerant of the cool) include:

These veggies work well as a direct sow because they are hardy, and don’t have as long of a growing season as perhaps tomatoes do (which would benefit from being started indoors to give it a head start). A quick read on the back of the seed pack will tell you how far apart and how deep to plant the seeds. This is just a rule of thumb, feel free to plant a little close together so you can maximize your space.

As far as plants that don’t love direct sowing, this includes:

It is best to start these as seeds indoors in March, and then transplant them outside when they are full grown and hardened off.

Since there are so many variables, knowing when to plant a vegetable garden is an important skill. The more you plant and garden, the more intuitive and confident you become you become.

I’d love to know if you have any other questions about when to start a vegetable garden, let me know in the comments below.

Top 6 Gardening Mistakes & How to Avoid Them

Easy Guide to Growing Sprouts in your Kitchen

Too Late To Start A Garden? 8 Vegetables You Can Still Plant in July

Simply fill in your last frost date and make your schedule!

How to start a garden Ebook & Garden planner – BUY NOW

Learn when to start your seeds no matter what zone you're in. Simply fill in your last frost date and make your schedule.

I'm Abbagail. I started this blog to encourage, educate and inspire people to get back to their roots and really become an active participant in raising and growing more of their own food. Thanks so much for stopping by.